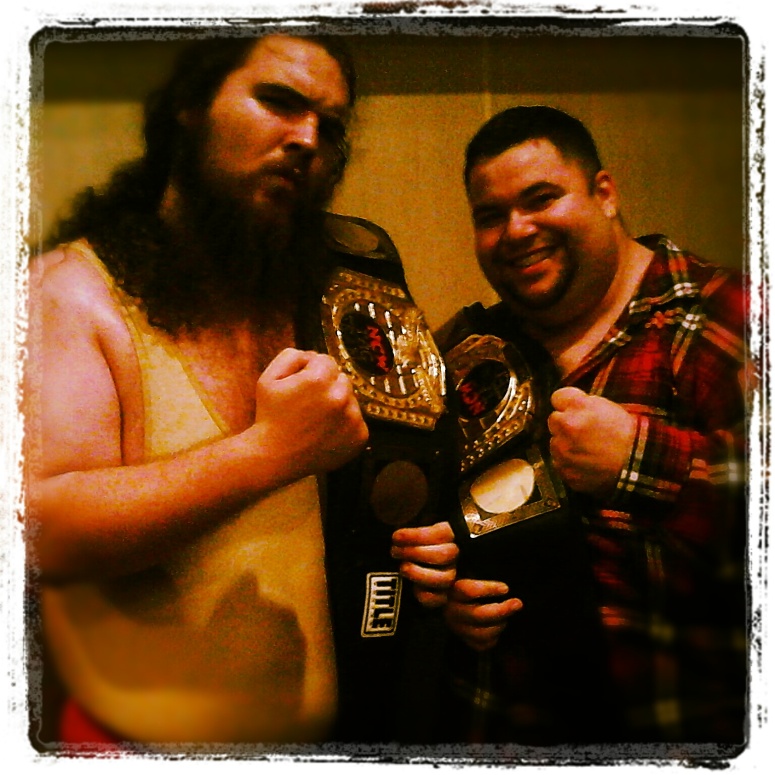 – David Marxxx-Loomis (without his adopted father JC Marxxx) d. Dale Denile in Denile’s first NCW appearance since being ousted from the Schillar Park Posse in 2010 by his former partner “The Maniacal” Jack Krueger.

– Rob the Giant d. “The Unequaled One” Todd Sople in a great match-up that saw both men give their all. Following the match, Giant offered a handshake to Sople, which he reluctantly accepted.

– “The REFolution” Anthony Greene d. “The Twisted Hatter” Alex Creed in a huge upset, as the former NCW official continues to make waves in the ring as a competitor thanks to training from his brochacho “The Juice” JT Dunn.

– “The Insider” Kevin Perry w/ Rob the Giant d. NCW New England Champion “The Original Showoff” Mike Paiva w/ JC Marxxx via disqualification when Paiva knocked out referee Redd Roche in a cheap attempt to throw out the match. Paiva had already attempted to walk out on the match to retain by count out, only to be thwarted by Livsley who tossed Paiva back in. With nowhere left to turn, Paiva decked Roche.

– Following the match Dean announced that on November 30th at NCW WrestleFest VIII Paiva would have to defend the New England Championship against Kevin Perry in a Lumberjack Match that would also feature Livsley himself as the special enforcer referee.

– “The Portuguese Sensation” Ruy Batello (as the Lumberjake) and the Lumberjake (as Ruy Batello) won the NCW NO FEAR Costume Battle Royal after deciding they didn’t want to fight one another. Other participants included;

– NCW Heavyweight Champion Buddy Romano w/ JC Marxxx d. Eddie Loomis in what was believed to be a Pick Your Poison Match. Following the victory however “The Juice” JT Dunn came out and told Romano that Eddie wasn’t his chosen opponent, but rather a former NCW New England Champion in the form of “The Celtic” Conner Murphy (formerly known as Paul Hudson)!

– “The Celtic” Conner Murphy d. Buddy Romano in a huge upset after Dunn distracted the NCW Champion. A disgruntled Romano then announced his challenger for Dunn, the dastardly Scotty Slade!

– Scotty Slade d. “The Juice” JT Dunn in the Pick Your Poison Challenge after a low blow from Slade.