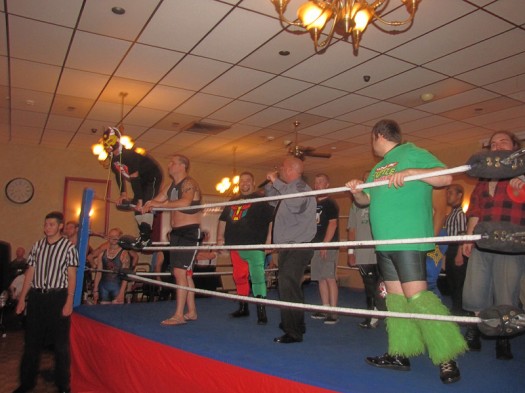 For exclusive pictures from this event, check out Picture Dave’s link here

– The entire NCW locker room came out to the ring before the event started, as NCW Commissioner Dean “The Beast” Livsley stormed out demanding law and order be restored within the promotion. After the events of Spring Slam last month he wanted to make it clear to everyone that no one was bigger than NCW, not even him. At the end of the day however he was still the boss and until then he’d be calling the shots, not Zero Tolerance. Livsley then hyped up the Luck of the Draw Match #1 Contenders Match as well the upcoming NCW Title Match between Zero Tolerance’s Buddy Romano and David Marxxx-Loomis.

– “The Portuguese Sensation” Ruy Batello d. NCW Tag Team Champion “The Granite State Destroyer” Gunar Rowe in singles action. With “Dynamic” Jon Thornhill injured and “The Unequaled One” Todd Sople out of Dedham, Batello was able to score a measure of revenge against the man who screwed him out of the Tag Titles in West Warwick, pinning him with ‘Ruination’.

– Before the next scheduled match, “The Maniacal” Jack Krueger entered the ring along with his disciple Alex Creed. Krueger said that he wasn’t worthy yet, and still had much to prove. Krueger opted out of his match, and instructed Creed to decimate his onetime tag team partner Hunter Ward in Dedham.

– In the “Tootsie Time” interview segment, Michael Tootsie Esquire opted to call out someone he wasn’t quite familiar with in the NCW locker room, the young upstart “Too” Shay Silva. MTE began harassing Silva, degrading him and insulting him left and right. After giving Shay a sucker slap, “Too” Shay responded back with a vicious slap while challenging MTE to a fight.

– Before the tag team match, Zero Tolerance came to ringside to brag about their dominance. “Cocky” Kevin Cordeiro took the microphone and stated that he’s gone beyond cockiness since joining Mike Paiva, and has re-christened himself “The Heater” Kevin Perry. Mike Paiva also stated that if he lost their match, he would be the chauffeur for the Lumberjake’s Lumberdate!

– NCW Heavyweight Champion Buddy Romano d. David Marxxx-Loomis to retain the NCW Championship after hitting a low blow on Loomis, giving him an opportunity to drive his knee into David’s skull. Loomis was on his way to defeating Romano when manager JC Marxxx audibly called for Buddy to get up, inadvertently distracting JC’s son David. Following the match both men walked out on Marxxx, leaving Zero Tolerance in shambles.