NORWOOD– On Saturday night December 14th Northeast Championship Wrestling presents the final event of the 2013 wrestling season when we return to the Elks Lodge [152 Winslow Avenue] in Norwood, MA for NCW WrestleFest IX! Competing in a seasonal format from February through December, for over sixteen years we’ve presented a unique showcase for fans of professional wrestling bringing forth our larger than life characters, dynamic storylines, and incredible athleticism all while providing a unique experience for fans of all ages.

After stealing the position of power at NCW’s REUNION in April, the Emperor of NCW “Dastardly” Doug Summers must finally face off with former Commissioner Dean Livsley at WrestleFest, putting everything on the line in their final encounter. Livsley has fought tooth-in-nail to get one more match with Emperor Summers, but with the loyalists of Team Dynamite supporting the NCW ruler will the former “Beast” get a fair chance to reclaim his crown?

In the second half of WrestleFest’s double main event, NCW’s first Triple Crown Champion “The Maine Event” Scotty Vegas puts his Heavyweight Championship on the line against the 2013 Big City Rumble winner “RIOT” Kellan Thomas, a competitor who’s risen to the top of the singles ranks since his days as a tag team specialist. As the weary Vegas looked to keep a distinctive psychological edge over Thomas, the NCW Champion wisely stole Kellan’s mascot and manager Kepler, prompting the #1 contender to lose his focus heading into their epic title confrontation December 14.

Two powerhouse tag teams will  collide in Norwood when David  & Eddie Loomis collide with the Big Lovable Team of “The Portuguese Sensation” Ruy Batello & the Lumberjake in a volatile tag team grudge match. While the foursome attempted to co-exist this year to help their mutual friend and partner Dean Livsley, tension continued to build until a frustrated Ruy Batello finally snapped on the younger Loomis at NCW NO FEAR this past October. 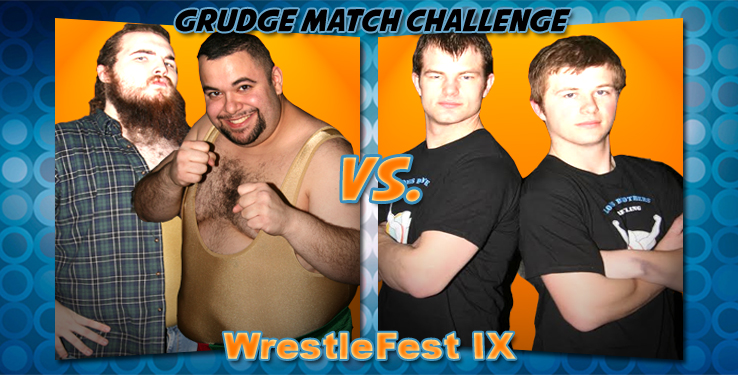 The Norwood Elks Lodge is located at 152 Winslow Avenue in Norwood, MA just moments away from Rt. 1A and the Norwood Town Center. Doors open for this event at 7pm with a 7:30 bell time. Tickets will be available at the door $10 for adults and $5 for all kids twelve and under. For more information on Northeast Championship Wrestling please be sure to like us on Facebook at http://www.facebook.com/NCWwrestlng and follow us on Twitter @theNCWtweets!