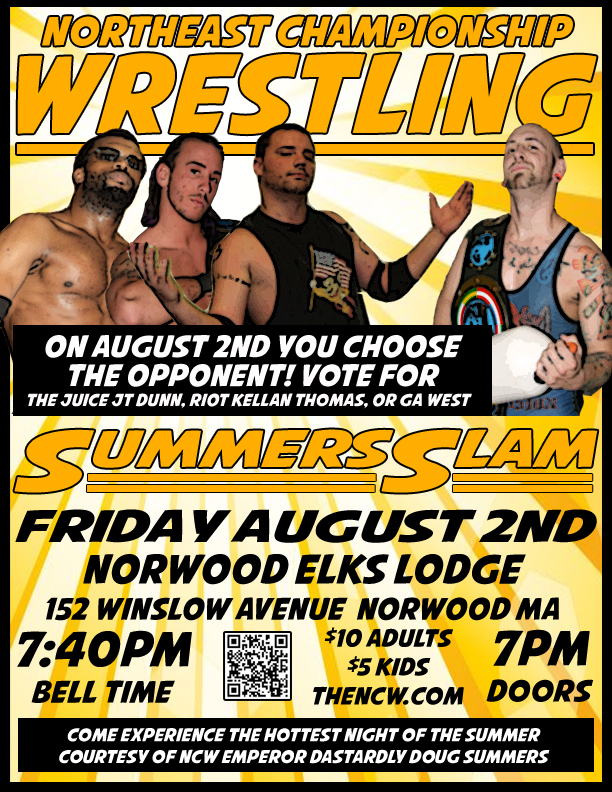 NORWOOD– On Friday night August 2nd Northeast Championship Wrestling’s 2013 wrestling season continues when we make our return to the Elks Lodge [152 Winslow Avenue] in Norwood, MA when Commissioner Doug Summers presents Summers Slam! Competing in a seasonal format from February through November, for sixteen years NCW has presented a unique night of entertainment for fans bringing forth our larger than life characters, dynamic storylines, and incredible athleticism all while providing a unique experience for fans of all ages.

On August 2nd the fans in Norwood will have the rare opportunity to decide who will wrestle the NCW Heavyweight Champion at Summers Slam when the fans in attendance will choose the opponent for “The Maine Event” Scotty Vegas for the NCW title. The three competitors eligible for voting are the two time former Heavyweight Champion “The Juice” JT Dunn, the reigning NCW New England Champion “Simply God’s Best” GA West, and the ever popular “RIOT” Kellan Thomas who will of course have the trusty puppet Kepler by his side. Whoever the fans choose, Vegas has stated that he is ready and waiting to dominate the competition as NCW’s first ever Triple Crown Champion.

The “benevolent” and “gracious” NCW Commissioner Emperor “Dastardly” Doug Summers, having the nerve to name the event after himself, has set up a coup August 2nd pitting himself against the wilderness warrior Lumberjake while also setting up his Inglorious Dastards (“Terrible” Tony Caruso & “The Beast” Brandon Behm) with a Tag Team Championship Match against the NCW Tag Team Champions David & Eddie Loomis. Can Summers and the Inglorious Dastards secure a clean sweep when NCW returns to Norwood? Not if the former Commissioner Dean Livsley has anything to say about it as he positions himself against the man who screwed him out of his job as NCW’s sheriff.

Also appearing in Norwood will be the NCW 2012 Rookie of the Year “All Good” Anthony Greene taking on “The Original Showoff” Mike Paiva in a Last Man Standing Match, “The Maniacal” Jack Krueger and Maniacally Twisted, Steve “The Turtle” Weiner, Rob “The Giant” Araujo, the debuting Tomahawk and many more!

The Norwood Elks Lodge is located at 152 Winslow Avenue in Norwood, MA just minutes away from downtown off Rt. 1A [Washington Street]. Doors open at 7pm with a 7:30 bell time. Tickets for this event will be available at the door with $10 for adults and $5 for kids twelve and under. As always card is subject to change. For more information on Northeast Championship Wrestling be sure to visit us online at http://theNCW.com, follow us on Twitter @theNCWtweets, or like us on Facebook at http://www.facebook.com/NCWwrestling.