And the winners are…

In the biggest upset of Northeast Championship Wrestling’s 2012 Season Awards, “Simply the Best” GA West narrowly defeated the two time Heavyweight Champion JT Dunn to become the 2012 Wrestler of the Year, edging the champ out by only one percent of the vote. A flood of last minute votes propelled West to 1st place, shaking up the polls and defeating “The Juice”.

While Dunn can say he had the more memorable 2012 winning two Heavyweight titles in the process, “Simply the Best” wrestled a wide variety of competition this past Season, continuing to hone his craft as one of New England’s best wrestlers.

In 3rd place at 17% is the former NCW Tag Team Champion “RIOT” Kellan Thomas, coming off his first year as a singles competitor in NCW after his DUI tag team partner William Thorne moved to Florida in April. Kellan’s 2012 rival Scotty “By GOD” Vegas clawed his way into 4th place despite quitting the company at WrestleFest VII, defying the odds as NCW ushered in a new era of main event competitors. 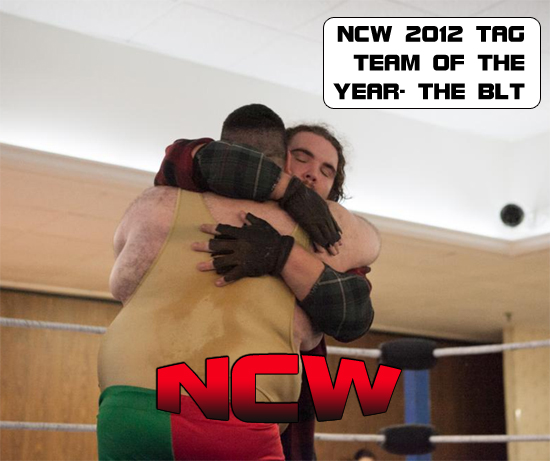 This past year gave way to many of NCW’s best and brightest tag teams breaking up or drifting apart, but 2012 will forever go down as the year of the Big Lovable Team thanks to the uniting of “The Portuguese Sensation” Ruy Batello and Lumberjake— The BLT! Coming together at NCW NO FEAR, Batello & Lumberjake immediately captured the hearts of NCW fans AND the vacant Tag Team Championship in short order.

Their only competition in the voting  came from a team no longer together, but still one of NCW’s most ensduring tandems in the 2010 and 2011 Tag Team of the Year, Destruction Under Impact. “RIOT” and William Thorne dominated the tag team ranks in the first half of 2012, until falling to the Unequaled Destroyers at NCW’s 15 year REUNION.

Though “Dynamite” Doug Summers turned his back on longtime friend Steve “The Turtle” Weiner at WrestleFest, the Super Rad still managed to win 8% of the vote more likely due to Steve Weiner’s popularity rather than Doug Summers’ treachery.

Christopher James & Michael Tootsie Esquire won 8% of the vote. Let that sink in for a moment…

If one match signifies what NCW was all about in 2012, it was Buddy Romano defending his NCW Heavyweight Championship against “The Juice” JT Dunn in an I Quit Match at WrestleFest VIII. These two bitter rivals spent nearly the entire year at one another’s throat, each encounter building to this final showdown in Norwood, MA.  In the end it wasn’t just Romano putting his NCW title on the line against the former champion, it was Romano putting everything on the line to prove himself as being NCW’s best. Zero Tolerance. JC Marxxx. His place in NCW history. Everything was put on the table when Dunn & Romano collided at WrestleFest, and they did not disappoint. After forcing Romano to tap out to the ‘Lion Tamer’, “The Juice” thanked the fans for supporting him through it all, and signified a brand new world going forward for Northeast Championship Wrestling.

At the beginning of each Season, it’s tough to determine who will break out as the next big thing. 2009 was the first year NCW recognized a Rookie of the Year, and since then each rookie has made a significant impact on the NCW landscape. The 2012 Rookie of the Year first arrived in NCW back at the beginning of the 2011 Season. But wait, how does that work? Well that’s because your 2012 Rookie of the Year is NCW referee Anthony Greene, winning in a landslide with 63% of the vote. It wasn’t until July in Foxboro that “The Maniacal” Jack Krueger challenged AG to a wrestling match, furious over his officiating capabilities. Thanks to a timely assist from “The Juice” JT Dunn, Greene upset Krueger and the rest is history. Since the summer AG has trained harder and harder to become a full time wrestler in New England, looking for an opportunity to prove himself as an in-ring competitor. In 2013 he’ll have his chance.

The overwhelming support for underdog Anthony Greene is evident in the 2012 Season Awards, with AG taking the 2012 Most Popular award as well, just surpassing the NCW Heavyweight Champion in the voting.

Uncle Joe’s favorite wrestler has finally won something! Unfortunately for Christopher James, his victory comes in the form of NCW’s Most Hated Wrestler, a dubious distinction for many of NCW’s most vile rulebreakers.

2012 was a year of shocking moments, but this year the fans truly believed that “The Maniacal” Jack Krueger coaxing referee Anthony Greene into the ring at SUMMER MELTDOWN was our 2012 Holy $#!T Moment of the Year.

Taking 26% of the vote was David Loomis finally breaking away from his adopted father JC Marxxx, courtesy of a bicycle kick right to the face, while “Dynamite” Doug Summers violent turn on his longtime friend Steve Weiner rocked 15% of the vote.

It’s tough to call any of these nominees inanimate, especially when they get the crowd reactions that they do, but 2012 saw Kepler, the wild haired puppet who loves soccer emerge as NCW’s favorite inanimate object of 2012. The trusty mascot of “RIOT” Kellan Thomas, Kepler even competed in the 2012 Big City Rumble before getting eliminated by Scotty “By GOD” Vegas.

2012 was a year of special comebacks and surprises, no more so than NCW Commissioner Dean “The Beast” Livsley bringing back “Revolution” Chris Venom to host NCW’s 15 year REUNION, and oversee the epic night of action.

This year’s Best Non Wrestling Personality Award came down to one grudge match, Santa Claus vs. Doc Ozone. No other nominee came close to touching this back and forth race between these two fantastical myths come to life. In the end it was Doc O taking the win,standing by his 2012 Wrestler of the Year GA West, while Santa returned to the North Pole empty handed.

Until next year of course…

From West Philadelphia he was born and raised, but he’s also your favorite Northeats Championship Wrestling character– He’s Souffle!!