Growing up as a kid reading comic books, one of the best comics out there was Marvel’s WHAT IF? series, chronicling your favorite Marvel characters (Captain America, Spiderman, the X-Men) placed in various tales of adventure through time travel, happenstance, or just choosing the wrong door to exit. With 16 plus years of history there have been a lot of “what if” scenarios here in Northeast Championship Wrestling. Here are some of our favorites… 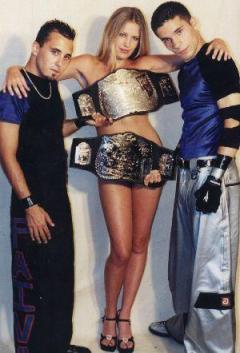 During the “golden age” of Northeast Championship Wrestling, two teams forged ahead to become the cornerstone of the NCW tag team division, as Emerald Fuzion (Jason Blade & “The Full Effect” Mike Paiva) and the Elements of Suicide (Cinna & Onyx) battled over the NCW Tag Team Championship throughout 2002. At NCW WrestleFest III  Fuzion upset EOS for the championship, only to have CInna and Onyx attack both men following the match while the nefarious Gina Marie attacked Fuzion’s manager Mercedez. Things only escalated from between the groups, leading to a 6 Person Tag Team Match that July at NCW Roadway Juice all three members of EOS taking on the three members of Fuzion.

During the hotly contested match the lovely Mercedez found herself alone in the ring with Cinna and Onyx, leading to the former Tag Team Champions to hit their patented “bitch-killer” on Mercedez, laying her out with what can only be described as a tandem pedigree. This incident led to a huge locker room confrontation following the match between EOS and the NCW roster, resulting in a near riot until The Elements left the venue.

With the situation reaching a fever pitch, NCW officials planned on settling the rivalry once and for all, setting up a Ladder Match for the NCW Tag Team Championship, with both Gina Marie and Mercedez banned from ringside.

Unfortunately for both teams NCW went on sabbatical the following month, putting their show-stealing conclusion on indefinite hiatus. 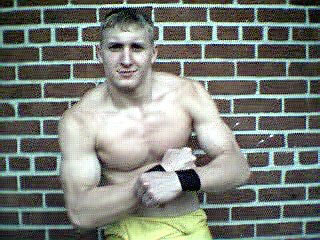 Before NCW took a two-year hiatus from promoting events, the reigning Heavyweight Champion Ruy Batello was blindsided when his best friend and tag team partner MTE turned on “The Portuguese Sensation”, joining his brother Tim Kilgore and reuniting with his cousin JC Marxxx in Zero Tolerance.

While plans were being drawn up for a potential title match between Batello and Michael Tootsie Esquire at the following NCW event, there was one man waiting in the wings who was furious with the Heavyweight Championship being used as some prop in a melodramatic soap opera.

Though we know him today as Kenny Dykstra, former WWE Tag Team Champion and charter member of the Spirit Squad, at the time Phoenix was a hungry, antagonistic rebel led by “The Mouthpiece of the East” Sean Gorman and looking for the spotlight. After coming up short against NCW New England Champion “Psycho” Mike Osbourne , many wondered what was next for the young Phoenix.

At that point the only thing that mattered to me was the spotlight, and being in the spotlight meant being champion. When I didn’t win the [NCW New England] title, I struggled with how I could lose. I was better than that. I was the best wrestler in the company. Then I saw NCW’s Heavyweight Champion getting laid out by his clown of an ex-partner, and him telling people he’d rather lay down than fight MTE. If I ever saw Ruy Batello lay on the mat instead of fight for his belt I would have dropped the legdrop on his sorry ass and he’d never see it coming.

Though he never did get the chance to drop the leg on Batello, the children’s author has always kept a flame alive for a potential encounter with “The Portuguese Sensation” in an NCW ring. Eleven years later, it’s never too late.

It’s no secret that NCW is a very tight-knit clique, and that over the last sixteen years the bonds that have formed between the wrestlers of Northeast Championship Wrestling cannot be broken, if not strained. But what if it was more than that? When NCW returned in 2005 after a two-year sabbatical, the promotion once known was rapidly changing, and the environment cultivated a very strange dynamic within the locker room.

While no one would outright say it, speculation at the time was that there was a very close guarded group of wrestlers who had dubbed themselves “The Main Eventers”, who conspired to control the NCW Heavyweight Championship, and had done so since 2000 when “Revolution” Chris Venom won the NCW Championship from Triplelicious in Plainfield, CT.

Now while Trip didn’t want to necessarily lose to Venom, at the end of the day the title was still protected by the Main Eventers, all originally sponsored by NCW founder JC Marxxx in one way or another at some point. Chris Venom, Triplelicious, Tim Kilgore,  Ruy Batello. From 2000 until 2006 the NCW Heavyweight Title was held by one of these men. And while allegiances changed and rivalries renewed over the years, at the end of the day these four men had agreed to covet the NCW title as their own while blockading anyone else from winning the title.

The wrinkle in the Main Eventers plan came to ahead when “The Portuguese Sensation” Ruy Batello retired after defeating Chris Venom for the NCW title at COLLISION COURSE 2006. With the title being vacated, a whole slew of young up and comers now had an opportunity to leave with the gold as champion. In fact, at Silence the Violence VI when the Heavyweight Title was decided in an 8 Man Tournament both Tim Kilgore and Davey Loomis made it to the Semifinals in hopes of keeping the Main Eventers alive, only to see their hopes dashed by young guns Davey Loomis and “Dynamite” Doug Summers respectively.

Even after Doug Summers became the new NCW Heavyweight Champion, a crazed JC Marxxx made one final hail mary pass to have Triplelicious win back the NCW Championship, only to see his hopes dashed once more. Eventually the rumors of the Main Eventers and their reign over NCW began to fade away, culminating with Marxxx finally taking Davey Loomis under his wing as his new charge (and eventual adopted father).

So at the end of the day, the Main Eventers was just another conspiracy theory. A helluva coincidence in a string of them. I mean it’s not like we could rewrite NCW history…

Did you know that Ruy Batello was NCW’s most vile and evil rulebreaker, lording over Northeast Championship Wrestling with an iron fist? Or that Jason Blade and Mike Paiva were grizzled freedom fighters working with a rebellion of younger wrestlers trying to usurp the Empire of Batello? Or that MTE’s son from the future Prometheus Tootsie traveled back in time to prevent his father from being a huge dickhead?

Of course you don’t. Because it never happened… Or did it?

By the end of the 2009 Season Michael Tootsie Esquire had lost a Loser Leaves Town Match to his brother Tim Kilgore, sending him out of NCW for the forseeable future. “Dynamite” Doug Summers (arguably the face of NCW at the time) defeated the returning “Portuguese Sensation” Ruy Batello in a Best 2 out of 3 Falls Match at WrestleFest V, while NCW Heavyweight Champion David Marxxx-Loomis broke Richard Pacifico’s jaw, easily retaining the Heavyweight title in the night’s Main Event.

As JC Marxxx and his adopted son David began leaving ringside after ripping Pacifico’s jaw off, the lights began to flicker inside the West Warwick Elks Lodge. The walls began rumbling with the chandeliers shaking and crashing to the floor. With smoke pouring out of the NCW entrance way, all the lights suddenly turn off. A hush falls over the fans in the Elks Lodge. A loud bang can be heard from the entrance, but we’re unable to see anything. The lights come back on, only to see a young man in the middle of the ring.

The referees have vanished from ringside.

David Marxxx-Loomis and JC Marxxx were no longer there, the Heavyweight Championship belt fallen to the ground.

Confused and disoriented, the fans only saw the stranger standing in the ring. His name was Prometheus Tootise, and he was from the future, twenty years to be exact.

“What have I done?” He muttered, as the lights cut to black once more.

From the gournals of Prometheus E. Tootsie;

“The Emperor Ruy Batello has controlled NCW since the end of  the year 2002, when he and his tag team partner, my father Michael Tootsie Esquire kept a stranglehold on the NCW Heavyweight Championship belt. Using my Uncle Tim Kilgore as a pawn to infiltrate Zero Tolerance and take over the stable from the inside, JC Marxxx and Triplelicious were booted from the group while Ruy took complete control. After pushing back challenges from a cavalcade of NCW competitors including Kenn Phoenix, Fuzion, Tommy Knoxville, and even Trip himself, it seemed as if Ruy Batello had won the war. He continued building his army, bringing in GQ Beast and the Elements of Suicide as his soldiers in his efforts to keep his throne.

This may be hyperbole, but my attempts to change the timeline and make my father a better person has resulted in some kind of butterfly effect, disrupting this worldine and turning Ruy Batello into some kind of monster. Has he always been this way? Was my Dad being a giant dickhead the only thing keeping Ruy in check? A counterbalance to the evil of Zero Tolerance only to be misaligned by my meddling?

Maybe my father is just a giant asshole and corrupts all.

I’ve traveled ahead to 2005, to see that JC has been fired from NCW after Trip lost a Loser Leaves Town Match to the “Revolutionary” Chris Venom, sending both men out of the promotion once and for all. Relentless in his pursuit to defeat Batello and reclaim NCW, Marxxx has created the Eastern Wrestling Federation (EWF) as an alternative to NCW, giving a safe-haven to those cast out by Emperor Batello. Secretly building a rebellion, from within, the war rages on. Flanked by newcomers Dynamite Summers, Davey Loomis, Evan “Hawkeye” Hunter, and veterans like Emerald Fuzion and Pacifico, JC prepares to build his own army for one colossal battle.

I’ve spent years attempting to fix the worldline and correct my mistakes, but I’ve only made things worse. Batello has stolen my Time Displacement Unit, and plans to continue messing with time until he’s achieved all his goals of ruling the wrestling world. I’ve partnered with the Rebellion, as the overconfident Emperor has agreed to one final showdown with his powerful Empire against the uprising of rebels. If we can survive the finale of WrestleFest XI in the Best of 7 Gladiator Series, I will attempt to retrieve the TDI and return back to 2002 to prevent the reconciliation of MTE and Ruy, hopefully bringing the original timeline back into focus and avoiding this horrific war. JC, Paiva, Dynamite, Davey, and only a select few know that by repairing the worldline, they’ll return to their old personas. To them the sacrifice is worth it, and it makes them more heroic then they’ll ever probably realize.

If I am successful in this mission, I will be sent back to the year 2029, where I will destroy the TDI permanently. This gournal will be preserved in a containment time capsule, safe from the changes to the worldline.

I am Prometheus Elizabeth Tootsie. This is my story.