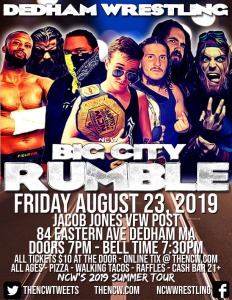 DEDHAM- On Friday night August 23rd Northeast Championship Wrestling closes out its 2019 Summer Tour with the BIGGEST night of the summer when we return to the Jacob Jones VFW Post (84 Eastern Avenue) in Dedham, Massachusetts for the 2019 Big City Rumble! Doors open at 7pm with a 7:30pm bell time with all tickets only $10 at the door. Online tickets can be purchased until the day of the event at theNCW.com/tickets for a discounted price. NCW live events now also supports SQUARE (VISA, Mastercard, Discover) for those looking for alternative methods for payment at NCW events.

The Main Event August 23rd will be the 2019 Big City Rumble Match, as thirty will enter this over the top homage to the WWE Royal Rumble with only one leaving the victor and earning an NCW Championship Match November 15th at NCW WrestleFest XV against “The Notorious BRG” Brett Ryan Gosselin.

The 2019 Rumble will feature multiple former Big City Rumble winners entering the fray including The Lumberjake (2014, 2015), “RIOT” Kellan Thomas (2013), Osirus (2014, 2018), and Tim Kilgore (2000) while this years Rumble will also feature newcomers making their first appearance such as Charlie Cashew and The Dirty Drifters’ Jacob Drifter. The Heavyweight Champion BRG has seemed unfazed by the looming threat of a new challenger for his championship, especially coming off his temporary loss of the NCW title at Kids Day 2019 against “Retro” Anthony Greene.

When NCW returns to Dedham “The American Hammer” Dan Terry will collide with “Insane” Dick Lane after months of brutalizing and humiliating “The Meta-Human Super-Villain”, eliminating his Turtles in Time partners one by one, and proving his ‘superiority’ over the so-called cartoon characters contaminating the NCW landscape. Lane finally took control and gave Terry a taste of his own medicine at Red, White, & Bruised last month, setting up this high-stakes confrontation August 23rd at the Big City Rumble. 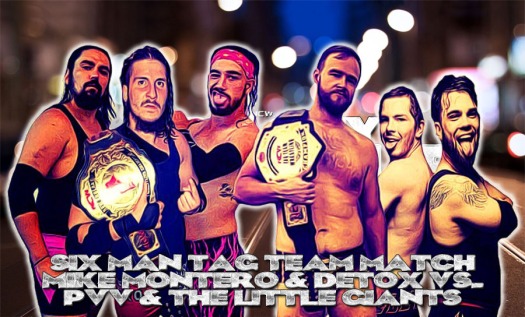 The road to tag team glory begins at the Big City Rumble as the former Tag Team Champions Detox (who held the Tag Team Titles for a total of nine minutes) team with NCW New England Champion “The Ace” Mike Montero to take on the two-time former Tag Team Champions The Little Giants Robbie “The Giant” Araujo & Bullet Grinvalsky and their partner– one half of the NEW NCW Tag Team Champions Perry Von Vicious in Six Man Tag Team action! With “The Native American” Tomahawk wrestling out of the country August 23rd PVV will enter the lion’s den with two teams who desperately want another shot at tag team gold. Can the occasionally villainous Perry work together with The Giants? Can this odd paired trio hold up against the formidable and well oiled machine of Detox and Montero? We’ll find out August 23rd in Dedham.