Northeast Championship Wrestling returned to the Jacob Jones VFW Post this past Friday night for the first of two huge NCW events taking place last weekend. A HUGE thank you to everyone who made the Big City Rumble and NCW FALLOUT a success.

Kevin Castro welcomed everyone to the 2018 Big City Rumble, happy to finally be in NCW and excited for the night’s action.

– “The Masshole” Mike McCarthy defeated “Classic” Kalvin Strange in the Classic Open Challenge, tapping out Strange and receiving a hero’s welcome back to NCW.

Osirus and “Foxy” Calvin Campbell alongside the mad Doc Ozone came out for their Tag Team Championship Match against The Kool People, with Osirus revealing he had a broken hand. He assured Campbell and Ozone he would be ready to fight. As The Kool People made their entrance The Maine State Posse attacked The Party, leaving Sammy Deleon and DJ AC to scatter from ringside.

Tying “Foxy” up in the ropes, The MSP (Alexander Lee, Aiden Aggro, and DangerKid) continued their assault on Osirus, prepared to lay an axe into Osirus’ broken hand until CrossFit and NCW President Dean “The Beast” Livsley made the save. The Posse demanded a shot at the NCW Tag Team Titles, which Kevin Castro was happy to provide until Livsley interjected, promising that the Posse could not just show up and do whatever they wanted. Livsley then made a Six Man Tag for later in the night with The MSP going up against Dan Terry, Vern Vicallo, and a fired up “Foxy” Calvin Campbell.

– “Retrosexual” Anthony Greene and Channing Thomas went to a No Contest when NCW Heavyweight Champion Todd Harris interfered breaking up the match. The Lumberjake then made the save for his old friend AG.

Following the match Harris ripped into Batello, dressing him down and insulting the King. While Harris continued to berate Batello Channing Thomas blindsided Ruy, with both men laying him out.

– “Sensational” Scott Levesque d. “The Dan Ram” Danny Ramirez won the Six Pack Eliminator to enter the Big City Rumble at #30, after “The Heavy Hitter” Shay Cash returned to the ring to attack Ramirez while Kevin Castro got himself accidentally involved in the match.

Casey Courageous came out to challenge “Slamdance” Tim Lennox to a Hair vs. Hair Match, with the loser’s hair getting donated to Locks of Love. The Underground Anarchy showed up at ringside, with Lennox attacking Courageous’ knee and brutalizing the youngster. The Anarchy then carried Casey to the back where the group cut his hair. Tim Lennox has promised to NEVER donate the hair to Locks of Love. 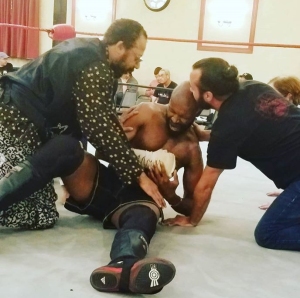 – With grit and determination Osirus won the NCW 2018 Big City Rumble with a broken hand, eliminating “Sensational” Scott Levesque to win the Rumble and go onto WrestleFest XIV to challenge for the NCW Championship.

NOTES OF INTEREST: Dean Livsley made The Kool People #1 and #2 in the Rumble, but refused to wrestle one another until Bullet Grinvalsky entered the Rumble ON TOP of Rob “The Giant” Araujo as one entry… THE UNCONTROLLED arrived in the Rumble alongside with The Epidemic (Leiter & Billington) and an alternate universe version of Dr. Artemis Cobblepot, as the group attacked “Insane” Dick Lane and The Turtles in Time, until STEVE “THE TURTLE” WEINER entered the Rumble at #14. coming face to face with THE UNCONTROLLED… “Foxy” Calvin Campbell was eliminated by Channing Thomas, who came into the match illegally to toss Campbell.