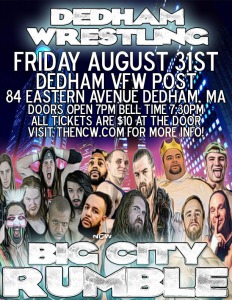 DEDHAM—On Friday night August 31st the biggest night of the summer comes to Dedham, Massachusetts and the Jacob Jones VFW Post (84 Eastern Avenue) when Northeast Championship Wrestling presents the 2018 Big City Rumble! Doors open at 7pm with a 7:30pm bell time. All tickets will be $10 at the door, however online discounted tickets can be purchased at http://theNCW.com/tickets!

Hosted by the one and only Kevin Castro, the event’s main event it will be the 2018 Big City Rumble Match, a 30 man over the top battle royal with the winner going on to NCW WrestleFest XIV on November 30th to wrestle for the NCW Heavyweight Championship.

But who will the NCW Champion be at WrestleFest? After the shocking conclusion of NCW Aftermath last month in Dedham, the upperclassman Todd Harris is the new Heavyweight Champion of NCW, shockingly defeating Lumberjake in the closing moments of the event after using his Ox Baker Memorial Cup title opportunity to cash in on Jake just moments after he wrestled a grueling title match against “The Ace” Mike Montero. At the Big City Rumble Lumberjake will face off with Todd Harris in a rematch for the NCW Championship, this time in a 2 out of 3 falls match to help ensure there’s a decisive winner and Heavyweight Champion.

The man who helped Todd Harris become NCW Champion will also get his ultimate title opportunity August 31st when “Royalty” Ruy Batello steps into the ring with NCW New England Champion “The Native American” Tomahawk as Batello attempts to claim the Triple Crown of NCW for the first time in his lengthy career. With him assisting Harris in achieving his goals, the King of NCW will look for some reciprocation with his Championship goals in Dedham.

The Jacob Jones VFW Post is located at 84 Eastern Avenue in Dedham, Massachusetts seconds from the town center and directly behind the Tahiti Restaurant. For more information on Northeast Championship Wrestling visit theNCW.com, like us on Facebook at www.facebook.com/NCWwrestling, and follow us on Twitter @theNCWtweets!