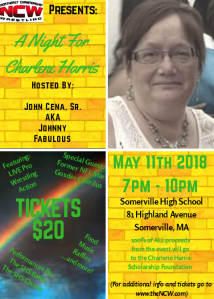 SOMERVILLE, MA— On Friday night May 11th Northeast Championship Wrestling is proud to present A Night for Charlene Harris, a special fundraiser celebrating the life of the late Charlene with all proceeds of this event going to the Charlene Harris Scholarship Fund.

Tickets are $20 for adults, $15 for all Somerville High School students with student ID, and $10 for all kids twelve and under. All ticket purchases come with vouchers for a free food and drink combo. Tickets are also available at theNCW.com/Charlene-Harris, with a special “HOPE” cancer awareness bracelet provided to all who purchase tickets online.

Former NCW New England Champion “The Dan Ram” Danny Ramirez has had one goal in mind while getting this event scheduled in honor of his mother, to take down the NCW Tag Team Champions The Kool People (DJ AC & Sammy Deleon) and celebrate this fundraiser with championship gold around his waist. “The Dan Ram” wanted to call out the Tag Team Champions in his hometown of Somerville he was cut off by the irate and irrational “Heavy Hitter” Shay Cash, but nothing will stop Ramirez from heading into Somerville to finish what he started.

A Night for Charlene Harris will also feature an NCW Heavyweight Championship Match when the two time NCW Champion The Lumberjake defends his Heavyweight Title against narcissistic and egotistical Perry Von Vicious, as PVV continues his quest to collect all the gold in Northeast Championship Wrestling whether it be by winning matches or writing checks.