The results are in, and after a divisive voting period we now have our official winners of the NCW 2013 Season Awards. This years voting saw some of the closest calls we’ve had since our inaugural awards in the 2007-2008 Season, and we thank you all so much for visiting theNCW.com and casting your vote. With 2013 now behind us be sure to check us out live on Friday night March 7th for our 2014 kickoff event COLLISION COURSE!

And without further ado, your winners are…

It was a close one, and no one will discount the loyalty Mike McCarthy has from his “Massholes” (see below) but 2013 was the year of the “RIOT”, and rightfully so. After a strong 2012 while adjusting to the singles ranks after his tag team partner William Thorne moved to Florida, Thomas kicked off a 2013 campaign of domination with championship gold his ultimate goal. After a string of strong performances against McCarthy, it was at NCW SummersSlam that the NCW fans let their voice be heard about their support for Kellan Thomas. Winning a fan’s vote by an overwhelming majority, “RIOT” went toe to toe with NCW Champion Scotty Vegas in a close encounter, with Vegas barely walking away with his title.

Resolved to finish what he started, Kellan entered the 2013 Big City Rumble and after eliminating “The Masshole” himself, “RIOT” once again became the #1 Contender for the NCW Heavyweight Championship. And at WrestleFest IX, nearly twelve years after he debuted as a hotshot rookie in Bristol, RI Thomas pinned Scotty Vegas in the middle of the ring to become NCW Champion, setting the stage for a very interesting 2014.

2013 saw a renaissance of tag team wrestling here in NCW, with these three teams clearly leading the pack. Though the BLT’s reign as Tag Team Champions didn’t last long, Ruy Batello and the Lumberjake did their best to stay in the hunt while the Inglorious Dastards essentially formed out of the nucleus of Team Dynamite to steal the titles from the ultra popular David & Eddie Loomis.

And that popularity drove the Loomis Brothers right to the top with 29% of the vote, putting a good amount of distance between their professional rivals the BLT, despite the BLT’s victory over David & Eddie at WrestleFest. Can the Loomis’ use this wave of momentum to become two time Tag Team Champions this Season? Only time will tell. 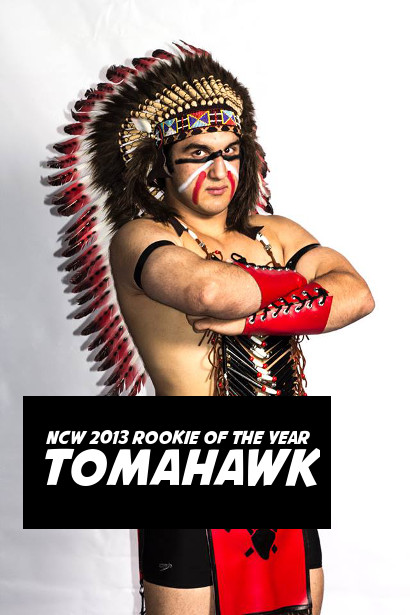 In 2009 there was Buddy Romano. In 2010 there was Eddie Loomis. In 2011 there was the Lumberjake. And in 2012 there was “All Good” Anthony Greene. What do all these men have in common with “The Native American Powerhouse” Tomahawk? Besides being labeled one of NCW’s fastest rising stars, Tomahawk finds himself in the good company of past and present NCW champions who have helped shown the path he must take heading into his sophomore Season.

This isn’t the first time Dean “The Beast” Livsley has won Match of the Year. In fact, Dean has won the Match of the Year two previous times in 2009 and 2010 (both against David Loomis). It was the 2010 Match of the Year where Livsley wrestled what he believed to be his final match, losing a Retirement Match after failing to win the NCW Heavyweight Championship. From there Dean became NCW Commissioner, and never looked back on his wrestling career. He was content to being a former Heavyweight Champion and one of NCW’s most beloved favorites.

But Doug Summers was never content with Dean Livsley’s place in NCW history. No, Doug harbored a grudge dating back to 2007 and when he finally turned his back on his partner Steve “The Turtle” Weiner one of the first people he blamed was Dean Livsley. After months of dodging the Commissioner, Summers was finally able to coerce him into a match at NCW’s 16 year REUNION, putting his job as Commissioner on the line.

While Dean may have been screwed out of his job that night in Norwood by the cunning Doug Summers, he proved why he was “The Beast” and proved he still had it with that amazing performance in the ring. Clearly the fans felt the same way with your 2013 Match of the Year. 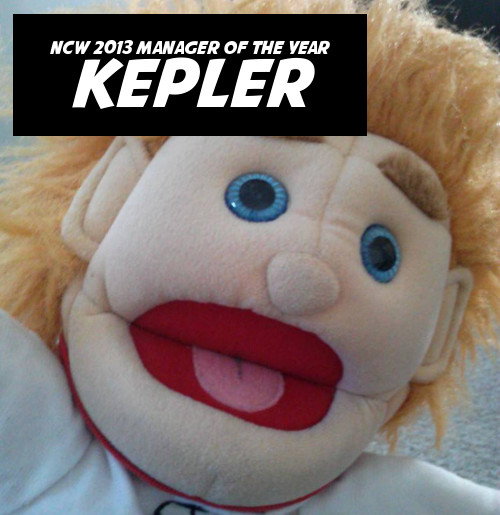 Only in Northeast Championship Wrestling could an inanimate object become Manager of the Year, but here we are. In 2013 Kepler helped motivate “RIOT” Kellan Thomas straight to the top of the NCW mountain, with the fans especially rallying around the puppet after he was kidnapped by Scotty Vegas at NCW NO FEAR.

And with Kellan Thomas winning the Heavyweight Championship from Vegas at WrestleFest IX, that puppet now technically manages the NCW Champion. Congratulations to the 2013 Manager of the Year.

Your 2013 Most Popular competitor is your NCW Commissioner, leading the pack amongst a slew of incredibly popular NCW personalities. In the end there’s is no shame in losing to “The Beast” in this category, especially with the Norwood fans loudly supporting all these men.

People hate “The Masshole”. But more than anything people love to hate “The Masshole”, giving him a commanding win in this years category taking nearly 50% of the vote. Former Commissioner Doug Summers came in at a distant second, while his lackey Pacifico trailed in third with 7%. The real question is can Mike McCarthy use his hated persona to his full advantage in 2014?

The darkhorse winner of this years Best Non Wrestling Personality is none other than head of security John “Ballzilla” Balis, a tremendous helping hand in the running of NCW events since arriving on the scene in 2011. John is an invaluable member of the NCW staff, ensuring the safety of the wrestlers and fans alike.

It was close, but the Holy $#!T Moment of 2013 saw “All Good” Anthony Greene take “The Showoff” Mike Paiva off the top rope and through the merchandise table, capping off their amazing Last Man Standing Match at NCW SummersSlam. Moments after this epic move saw both men lying on the mat while the Norwood Elks Lodge buzzed with anticipation, with AG making it to his feet beating the ten count and giving him the win.   While REDD WOOD teaming was one helluva fun moment, the Last Man Standing Match left everyone with just one thought– “HOLY S#!T!!”

After an eleven year absence from the promotion, 2013 saw the formerly known “Toxic” Tommy Knoxville return to the NCW rings under his given name Mike McCarthy, bringing an unorthodox edge onto the NCW landscape as “The Masshole”. It was a successful year for “The Masshole” too, nearly winning the 2013 Big City Rumble and becoming the NCW New England Championship after defeating Rob “The Giant” Araujo at NO FEAR.

NCW 2013 WrestleCrap Moment of the Year

While every wrestling promotion has its ups and downs, no other place celebrates it quite like Northeast Championship Wrestling. With the first big snow storm (seriously, this is the worst winter in YEARS) putting a fork in the planned WrestleFest IX event this past December, fans had to wait until February 2014 to close out the 2013 Season. Epic fail. It should be noted this isn’t even the first time weather has destroyed a huge NCW event, but let’s just hope it’s the last.