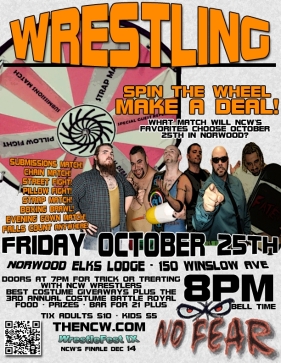 NORWOOD– On Friday night October 25th Northeast Championship Wrestling presents the penultimate event of the 2013 wrestling season when we return to the Elks Lodge [152 Winslow Avenue] in Norwood, MA for our annual Halloween spectacular NO FEAR! Competing in a seasonal format from February through December, for sixteen years NCW has presented a unique night of entertainment for fans bringing forth our larger than life characters, dynamic storylines, and incredible athleticism all while providing a unique experience for fans of all ages.

When NCW returns to the Elks Lodge for NO FEAR we will see the Final Countdown, a multi-man battle as Commissioner “Dastardly” Doug Summers brings his band of dirty dealing conspirators to take on former Commissioner Dean Livsley’s rebellion of NCW fan favorites in David Loomis, Buddy Romano, and “The Portuguese Sensation” Ruy Batello. With the final Summers-Livsley confrontation taking place at WrestleFest IX, this opportunity is paramount in building momentum heading into NCW’s final event of 2013.

On October 25th NCW Heavyweight Champion “The Maine Event” Scotty Vegas and the #1 contender “RIOT” Kellan Thomas will be competing in “Pick Your Poison” matches, with the WrestleFest opponents spinning the roulette wheel and choosing his rival’s match for NO FEAR in Norwood.

Doors for this event will be opening at 7pm for trick or treating with the NCW wrestlers, as well as door prizes for best costume, with the wrestling action kicking off at 8pm. Tickets will be available at the door, $10 for adults and $5 for all kids twelve and under. The Norwood Elks Lodge is located at 152 Winslow Avenue in Norwood, MA just seconds away from Rt. 1A and downtown. For more information on Northeast Championship Wrestling be sure to visit us online at theNCW.com and like us on Facebook at http://www.facebook.com/NCWwrestling for up to date news. 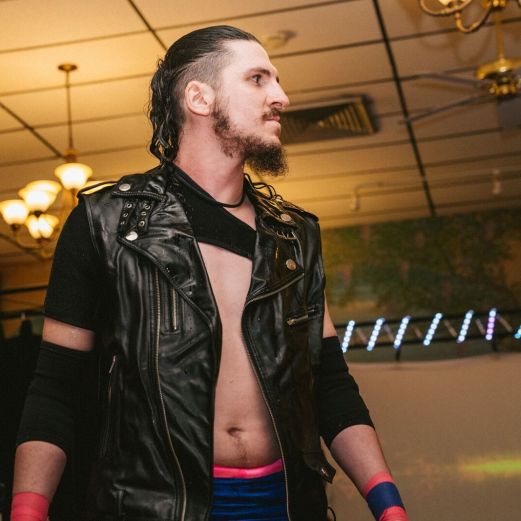