NCW returned to Dedham, Massachusetts this past Friday night for MANIA, kicking off WrestleMania weekend for those who couldn’t make it to New York/New Jersey. A big thanks to those who came out and supported us as we head toward NCW’s 2019 REUNION!

END_OF_DOCUMENT_TOKEN_TO_BE_REPLACED 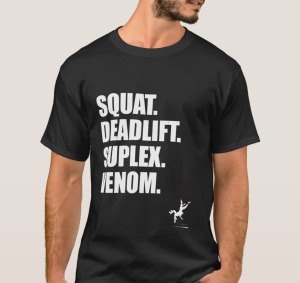 After “Retro” Anthony Greene pushed “Revolution” Chris Venom out of retirement back into the ring at NCW FALLOUT the two time former NCW Heavyweight Champion and future New England Pro Wrestling Hall of Famer has decided to return to the squared circle for his ‘Back to Reality’ tour, bringing his brand of powerful suplex throwing grappling to promotions all throughout New England this fall.

RESERVE YOUR SHIRT TODAY and pick your custom size. Chris Venom will at at the upcoming Northeast Championship Wrestling, Proving Ground, ElkMania, and Constitution State Wrestling  events with theselimited edition SQUAT. DEADLIFT. SUPLEX. VENOM. tee shirts! Only $25 each ($28 for sizes 2XL-4XL), limited quantity and sizes will be made available. If you’d like to reserve a specific size please purchase below using our Secure PayPal checkout. If you would like your shirt shipped please select the ORDER button for shipping & handling w/ mailing option!

SPECIFIC SIZES can be pre-ordered through October 7th, 2018. 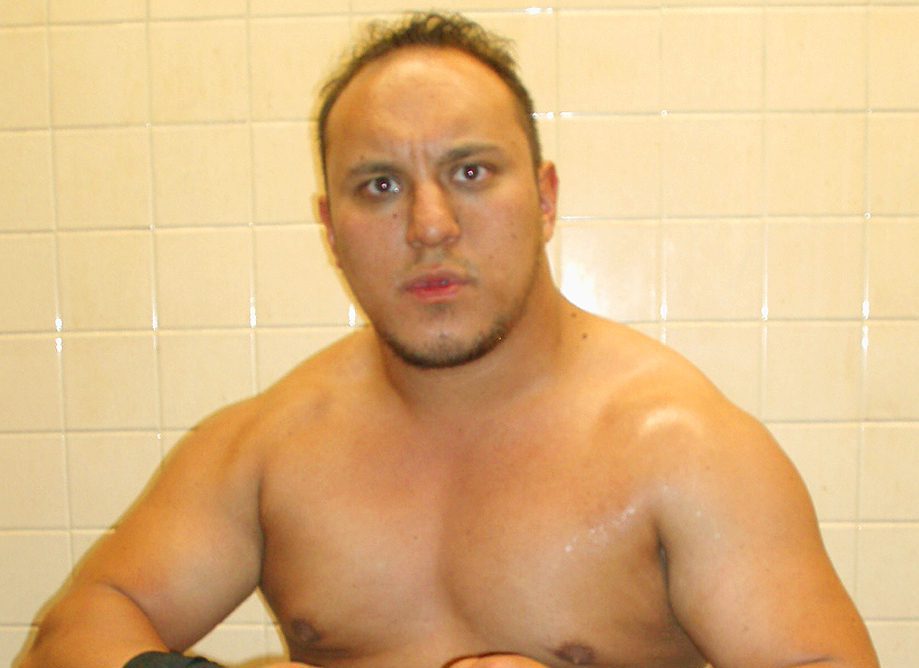 On Saturday night September 1st when Northeast Championship Wrestling returns to Bristol, RI for NCW FALLOUT we will present NCW HONORS, recognizing some of the trailblazers who have been a part of NCW over the years. Our first every Honoree will be the two time former NCW Heavyweight Champion “Revolution” Chris Venom!

END_OF_DOCUMENT_TOKEN_TO_BE_REPLACED

On April 27th, 2012 at NCW’s 15 year REUNION, JT Dunn pinned Buddy Romano in the finals of the Heavyweight Championship Tournament, cementing himself as a true main event player and becoming the twelfth man to win the NCW Championship since its inception in 1999. Nothing can be taken away from Romano however, a former Tag Team Champion who won the 2011 Big City Rumble last Season to win his first Heavyweight Title, albeit in controversial fashion. The burgeoning rivalry brewing between these two young guns mirror some of NCW’s biggest rivalries of the last 15 years, and recognizing what’s come before may help us look at what’s ahead for these two rising stars.

While NCW was founded in 1997, its formative years found the promotion in flux, floating around without direction or purpose. When “Revolution” Chris Venom struck out on his own alongside his main squeeze Gina Marie, “The Revolution” promised to lead Northeast Championship Wrestling into a new era, an era led by him. By that time Venom was already a former NCW Tag Team Champion with his PYCW running mate Dave Champion, but Venom’s sights were set on the Heavyweight Title, held by Big Poppa Drunk Sean O’Callahan. At Silence the Violence II (March 5th, 2000) Venom called out Big Poppa Drunk, and nearly walked out the NCW Heavyweight Champion in his first attempt. Due to interference by the Damned (Mad Dog Matt Storm & Draven), manager Sean Gorman, and Zero Tolerance (JC Marxxx, Ruy Batello, & Triplelicious) the match was thrown out by Commissioner Scotty Angel resulting in a giant locker room melee. During the ruckus Chris and Gina Marie bolted from ringside, stealing the Heavyweight Title belt. Shortly after Silence the Violence O’Callahan decided to walk out of NCW, forfeiting the Championship he no longer possessed. Venom took full credit for the walkout, but Commissioner Angel decided to punish “Revolution” by taking him out of the upcoming Title Scramble at NCW Meltdown (April 7th, 2000) and making him the guest referee instead. It was on this night in Seekonk, MA that the landscape drastically changed for the promotion and would help define the next year for the company when Triplelicious broke away from JC Marxxx and Zero Tolerance, winning his third NCW Title after eliminating his ZT partner Ruy Batello. Following the match Venom presented the NCW Championship right to the skull of Trip, firing the first shot and putting the new Champion on notice.

What followed was a yearlong back and forth with these two up and comers, wrestling up and down the east coast with Venom finally defeating Trip for the Heavyweight Championship on November 26th, 2000 in Plainfield, CT thanks to assistance from his newly minted Divine Legacy (“Primetime” Randy J & “The Main Event” Matt Burns). The dysfunctional relationship escalated further, bleeding into other promotions (ICCW, EWA) until their brutal No Disqualifications Match at NCW WrestleFest II (May 27th, 2001) where a battered and bloody Venom went down to a vicious ‘H-Cube’ onto the Heavyweight Championship, giving Triplelicious his fourth title win. While their rivalry eventually led to a partnership between the two, there’s no denying that their feud made both men better wrestlers, and helped define what NCW would become because of it.

Another feud that shows similarities for the potential a Buddy Romano/JT Dunn rivalry brings us to 2007 when “Dynamite” Doug Summers defeated three men in one night to win the vacant Heavyweight Championship, after “The Portuguese Sensation” Ruy Batello retired as Champion during the summer of 2006. It was at Silence the Violence VI (January 19th, 2007) where Summers defeated “The Monster” Cenobite and Triplelicious en route to facing his friend Davey Loomis in the finals for the vacated title. Both Loomis and Summers had debuted when NCW returned in 2005, and in the two years since both men had grown to be two of the cornerstones of the ‘new’ NCW, especially in the wake of Batello’s retirement. After a tremendous back and forth match, Doug was able to defeat Davey following a brutal ‘beautiful disaster’ knee crusher to win his first Heavyweight Championship. The two friends embraced following the match, and Davey would continue to watch Doug’s back until Loomis was put on the disabled list by Dean “The Beast” Livsley, keeping him out of action for nearly ten months.

When Loomis returned to action at the 2008 Big City Rumble (March 22nd, 2008), he returned to a world he no longer knew. During his time away Dean had made amends for the crimes he had committed and had become one of NCW’s most popular competitors, even teaming with Doug Summers himself. While Loomis tried to put the past behind him, emotions began to flare leading to a heated war between Livsley and himself. This didn’t stop Davey from winning the 2008 Big City Rumble however, earning another title opportunity against Doug at NCW’s 11 year REUNION (April 12th, 2008). Before Loomis would get his title match however, he would have to face “The Beast” one on one while Summers would have to defend his Championship against Tim Kilgore, forcing both challenger and champion to wrestle twice in one night. Summers was able to retain against Kilgore, but Loomis took things too far against Livsley, nearly destroying his knee in the process. Out for blood, a more intense Loomis singled in on an exhausted Summers, dissecting him and brutalizing him like never before. When Dean returned to ringside to distract Davey, Doug took the advantage and got the win in a huge upset. Unlike their first encounter a year earlier, there was no embrace following the match. Loomis assaulted Summers, nearly crippling him with a ‘kryptonite crunch’ and forcing the entire locker room to pour out to break up the brawl.

The next month at Silence the Violence VII (May 23rd, 2008) Loomis arrived in Dedham, MA with a new attitude and a new manager, as he aligned himself with JC Marxxx following the events of REUNION. Realizing that his alleged friends turned their backs on him, Loomis decided he would follow a man who never lied to him even when he was trying to end his career. The new attitude for Loomis pushed his persona over the edge, leading to psychological warfare with the NCW Champion. Thanks to JC’s managerial assistance, David was able to utilize his Luck of the Draw title opportunity against Doug the same night he won it (August 22nd, 2008) after Summers had already wrestled his title match against Evan “Hawkeye” Hunter. A tired and weary Summers was barely able to put up a fight, as Loomis dispatched “Dynamite”, ending his record breaking eighteen month title reign.

Let’s not mistake the fact that JT Dunn and Buddy Romano are nothing like their counterparts. The Venom/Trip and Loomis/Summers feuds are unique to themselves, and hold no actual bearing on the career paths of the current champion and challenger. There is something to be said for the parallels however, and what may spawn over the next few months with the Heavyweight Title situation. Both men have slowly risen through the ranks since debuting in 2009, and while Buddy’s transformation from happy-go-lucky Slamtech graduate into the sick individual he’s become has been shocking and jarring, no one can deny the talent he possesses especially after his banner year in 2011 thanks to his Best of 7 Series with Doug Summers, his alliance with the reformed Zero Tolerance, and his victory for the NCW Heavyweight Championship.

For Dunn it’s always been about proving himself, clawing his way into NCW after first appearing at the 2009 Big City Rumble and eventually earning a contract along with tag team partner Vincenzo Abruzzi after months of battling the veterans of NCW (David Loomis, Chris Venom & William King, etc…) for respect. Respect came at a slow pace, though ultimately he gained high regard from his peers after a brilliant series of matches with “Simply the Best” GA West and David Loomis during the 2011 Season. Dunn’s stock only grew, gaining notoriety in promotions all over New England while making huge waves in PWF-Northeast as their Lightning Cup Champion.

This year has been all about proving his critics wrong, and though Romano would never want to admit it he’s always done the same since joining NCW and wrestling in general. At NCW’s 15 year REUNION both men let it all hang out, and had an amazing match in the process. And while Dunn picked up the victory in Dedham, neither man is truly a loser in this first chapter. It’s what happens next that will define the legacy of both men.