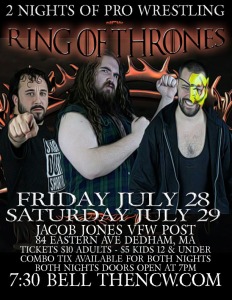 Live from the Jacob Jones VFW Post (84 Eastern Avenue), doors open at 7pm with a 7:30pm bell time for both nights of action. Tickets are only $10 for adults and $5 for all kids twelve and under. Discounted tickets are available online at theNCW.com/tickets and at the door the night of the events as well.

An eight man single elimination tournament will take place at this year’s Ring of Thrones, as well as a trio’s tournament pitting three on three. At night one the Quarterfinal Round matches for both tournaments will take place, with the Semifinal and Final Rounds taking place Saturday night.

With the Heavyweight Champion “Sensational” Scott Levesque hightailing it out of New England on vacation after barely escaping Aftermath the NCW Champion against Josh Briggs, “High Class” Rich Bass and Beau Douglas have found the perfect partner for The Uprising July 28th when the former partner of “RIOT” Kellan Thomas and former NCW Tag Team Champion “Almighty” Anthony Stone teams up with The Kool People (DJ AC & Sammy Deleon) in the Ring of Trios against “RIOT”, “The Showoff” Mike Paiva, and former NCW Champion The Lumberjake. The path to the Ring of Thrones Finals will be a bumpy one, and this high stakes showdown will be a real test for both teams.

The singles portion of the Ring of Thrones tournament will feature eight of the hottest up and coming contenders competing today including “Old School Cool” Cory Michael and “The Native American” Tomahawk mixed with NCW veterans like “Royalty” Ruy Batello and the three-time former New England Champion Osirus (w/ Doc Ozone).

The Jacob Jones VFW Post 2017 is located at 84 Eastern Avenue in Dedham, Massachusetts just moments away from the center of town and behind the Tahiti Restaurant. For more information on Northeast Championship Wrestling visit theNCW.com, like us on Facebook at http://facebook.com/NCWwrestling, and follow us on Twitter @theNCWtweets.