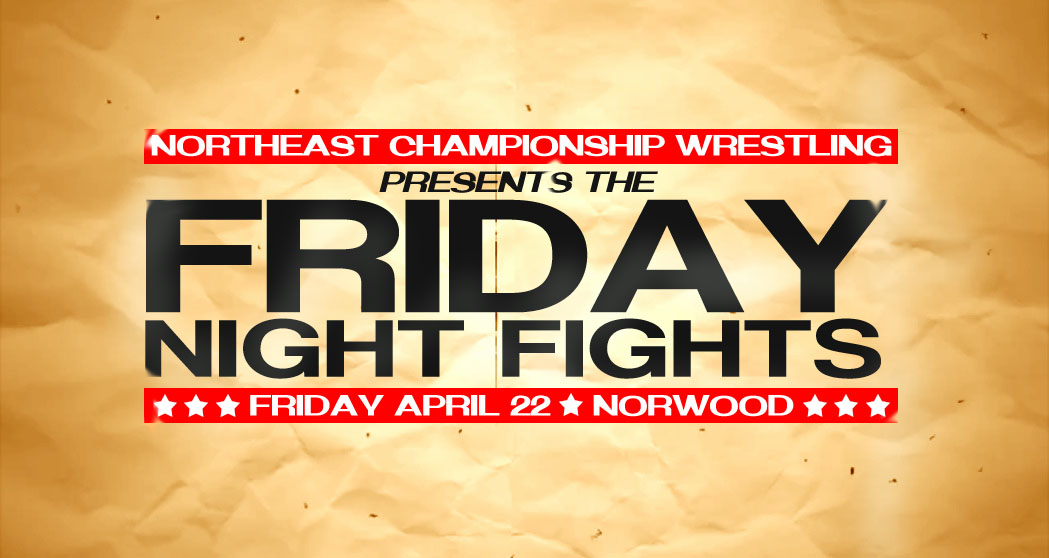 After months of back and forth between “RIOT” Kellan Thomas and “All Good” Anthony Greene since the reveal that Greene was The Masked Man who cost Thomas the NCW Championship, this Friday night in Norwood will see the former NCW Heavyweight Champion go one on one with the NCW 2015 Ox Baker Memorial Cup Winner in a #1 Contenders Match– with the reigning NCW Champion Lumberjake acting as the special enforcer referee!

Tensions have been running high in NCW since “RIOT” lost the NCW Championship last September, spiraling down with no way of getting control of the situation. In the meantime “All Good” Anthony Greene has morphed into a whole new man, obtaining an entourage of lackeys (Ashley Mason, “Foxy” Cameron Campbell, voiceless ring announcer, carpet boy) to assist him in achieving his goals of ‘making professional wrestling all good again.’

Fed up with the actions of his supposed best friend Lumberjake has finally intervened, looking for the truth behind AG’s hateful actions. At the heart of this IS the Lumberjake according to Greene, with “All Good” claiming he donned the mask to attack Kellan to help Jake win the NCW Title from Ruy Batello at WrestleFest XI. True or not Jake never asked for Anthony’s help, and now Lumberjake has offered his services to Commissioner Dean “The Beast” Livsley, ensuring no shenanigans take place during this high-stakes #1 Contenders Match. Even with the criticism stating that Jake shouldn’t involve himself when he will essentially be raising the hand of his REUNION opponent the NCW Champion has promised regardless who wins at the Friday Night Fights he will still be the Heavyweight Champion when it’s all said and done at the 19 year REUNION.