After nearly four years Northeast Championship Wrestling returned to the Jacob Jones VFW Post in Dedham, Massachusetts this past Saturday February 20th for the second half of our 2016 kickoff NCW Homecoming! A big thank you to all the fans who came out to support us both nights.

– Triplelicious d. Rob “The Giant” Araujo in the night’s opener, defeating Araujo with a killer spinning heel kick from “The Crooklyn Brawler.”

“Slamdance” Tim Lennox and TJ Richter came out next for tag team action, but a furious Lennox refused to team with his mentor after what happened the night before at COLLISION COURSE. Lennox then welcomed his tag team partner for the night– “Black Magic” Sean Feeney! Being knowledgeable in municipalities and bird law, Feeney found a loophole to his Loser Leaves Town Match as he’s freely allowed to appear in Dedham under his old NCW contract.

– The Heavy Hitters d. The Underground Anarchy in tag team action after an irate TJ Richter counted the three on his protege Tim Lennox for the second time in two nights after Richter took over referee duties from an injured Mike Dube (after Richter put Dube into harms way).

– The debuting “Dan Ram” Danny Ramirez defeated Christian Casanova in a huge upset, shocking the fans and the 2015 Most Popular Wrestler with a vicious brain buster suplex to get the win. 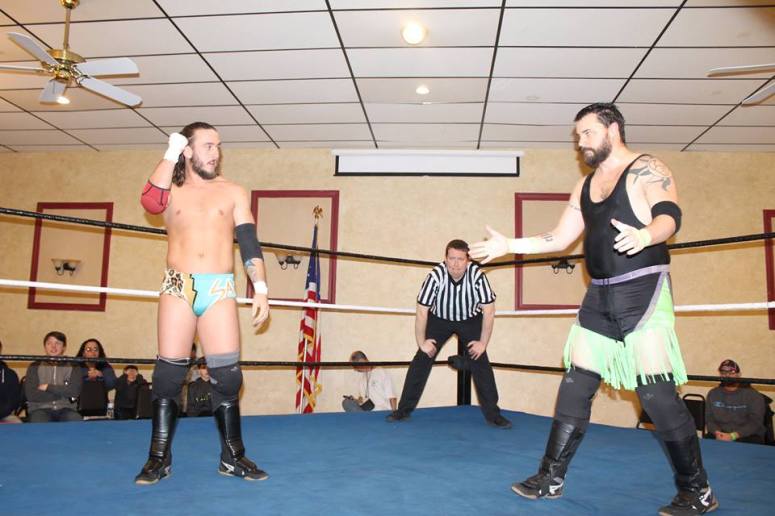 – In their highly anticipated showdown, “The Juice” JT Dunn beat “RIOT” Kellan Thomas via submission in a terrific battle of two former NCW Champions. Following the match both competitors showed respect to one another, much to the delight of the Dedham crowd.

NCW Commissioner Dean “The Beast” Livsley officially announced that Lumberjake would be defending his NCW Heavyweight Championship against Brick Mastone after what went down in Norwood at COLLISION COURSE between the two.

The 2015 Ox Baker Memorial Cup Winner “All Good” Anthony Greene made his way out to the ring alongside his personal assistant Ashley Mason, carrying a bottle of champagne to celebrate his victory over JT Dunn from the night before. Before celebrating Greene wanted to talk to his friend Mike Paiva, upset that people have been talking about him behind his back in the locker room since turning on “RIOT” Kellan Thomas at WrestleFest. AG requested a one on one match with Paiva, wanting to work out their frustrations with a friendly exhibition match.

– “All Good” Anthony Greene w/ Ashley Mason d. “The Original Showoff” Mike Paiva with the 1D after Ashley Mason hit Paiva with a low blow behind the referee’s back. The Lumberjake soon burst on scene to help Mikey, but while chasing AG around the ring Brick Mastone attacked Jake, hitting him with a vicious spear.

– NCW Tag Team Champions CrossFit (“The Fittest Man” Dan Terry & “The Prettiest Man” Derek Andrews) d. Turtles in Time (“Insane” Dick Lane & Steve “The Turtle” Weiner) after Dick Lane refused to tag in his partner throughout the entire match, overconfident after picking up their first win the night before in Norwood.

NCW returns to action on Friday night March 11th in Norwood, Massachusetts with NCW’s March Madness, and will return to Dedham on Saturday night May 7th with NCW Saturday Night!

All photos courtesy of Brittany Costa.