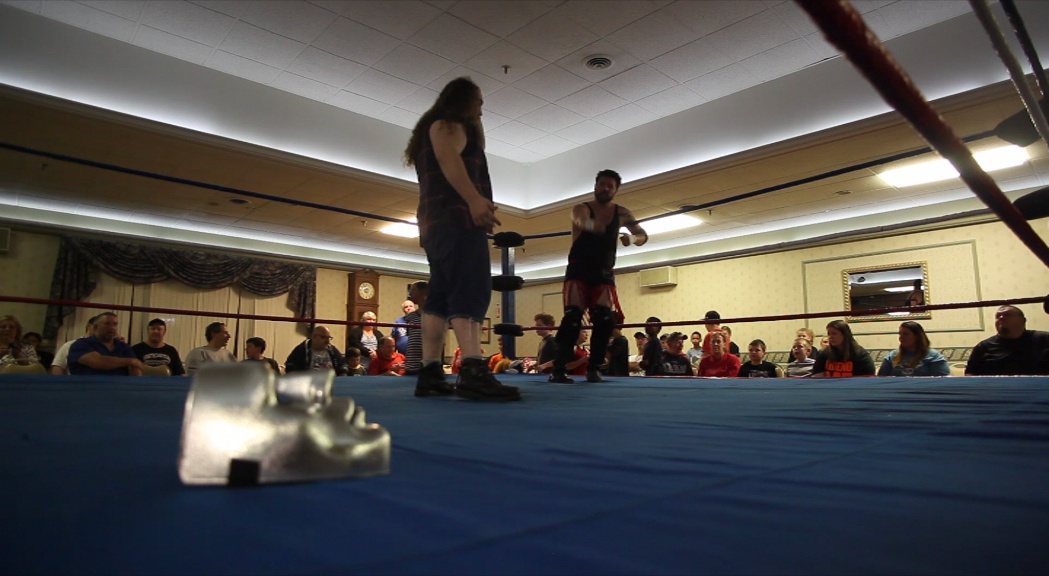 This past Friday night NCW returned to the Norwood Lodge of Elks for our third anniversary of running events out of the Elks Function Hall. Northeast Championship Wrestling would like to thank the Elks, all of our amazing fans and local businesses that have supported us since joining the community in 2012.

– In the night’s opener “All Good” Anthony Greene returned to NCW action, defeating rookie Bryce Clayton with his patented reverse cutter off the ropes, stunning Clayton long enough to get the 1, 2, 3.

– In a huge upset, “Slamdance” Tim Lennox (without the decimated Underground Anarchy by his side) pinned Rob “The Giant” Araujo with a vicious curb stomp as an unhinged Lennox made a huge statement toward the NCW roster and specifically the man he blames for all of the Anarchy’s problems “The Original Showoff” Mike Paiva.

“High Class” Rich Bass and his client “Sensational” Scott Levesque were brought out by “Toxic” Tom Warren for words about their upcoming New England Championship Triple Threat Showdown, but Norwood Elks fans would not give Bass the opportunity to speak, drowning the manager out with boos and prompting Levesque and Bass to leave once they realized the fans wouldn’t let up.

As a sore “Giant” was leaving the Norwood Elks Lodge, cameras caught Tim Lennox attacking Araujo by his car and laying him out in the middle of the parking lot while Underground Anarchy supporters cheered on in the distance.

– Steve “The Turtle” Weiner d. “Insane” Dick Lane in one of the most surreal matches in NCW history. This brawl literally went all over the Norwood Elks Lodge as a Looney Tunes chase scene erupted mid-match as Weiner chased Lane through the crowd and outside the building and  eventually back into the ring (after Weiner stole Frank Champion’s water). It should also be noted that a turtle and a Meta-Human Super-Villain fought it out and it’s not even Halloween yet.

– “The Native American” Tomahawk defeated “The Mastodon” Brick Mastone in a great match, pinning the big man after nailing his tomahawk chop off the ropes. Tomahawk’s victory was short-lived however when Crossfit (“The Selfie-Made Man” Vern Vicallo, “The Prettiest Man” Derek Andrews, and “The Fittest Man” Dan Terry) rushed the ring to attack “The Native American” from behind. With the help of their ally Mastone, Vicallo and Co. tied Tomahawk up  and smeared paint all over “The Mohawk Warrior”, disrespecting his heritage and culture.

The NCW Tag Team Champions then established their “Crossfit Rules”, stating that any member of Crossfit could defend the Tag Team Titles as Dan Terry was unable to compete due a slight muscle pull during an international Crossfit competition in Sandusky, Ohio the night before. Before long the former NCW Tag Team Champions David & Eddie Loomis arrived on the scene, looking for their own revenge on Crossfit.

– The NCW Tag Team Champions Crossfit defeated The Loomis Brothers to retain the NCW Tag Team Titles after Dan Terry took Eddie Loomis off the apron, distracting Davey long enough to receive a ‘Super-Screenshot’ from Andrews and Vicallo to give Crossfit the win.

NCW Commissioner Dean “The Beast” Livsley was out next, welcoming the 2015 Big City Rumble winner The Lumberjake and the reigning NCW Heavyweight Champion “RIOT” Kellan Thomas. As the WrestleFest XI Main Event faced off in the middle of the ring “Ruthless” Ruy Batello interrupted, looking to single out Thomas instead of his normal target Lumberjake. Batello then talked about his legacy, and talked about how Kellan was merely six days away from eclipsing Ruy’s record as the longest reigning Heavyweight Champion in NCW history.

Not one to back down from a fight, “RIOT” accepted Batello’s challenge for later in the night while Lumberjake promised that regardless who the NCW Champion would be come WrestleFest they’ll be going down to him.

– Triplelicious & Frank d. The Heavy Hitters to become the #1 Contenders for the NCW Tag Team Championship after a mistimed collision between Frank Champion and Shay Cash giving Frank the opportunity to hit a brutal ‘Cranky Slam’ on Cash and allowing Trip to land his picture perfect leg drop on Cash for the victory.

– “Sensational” Scott Levesque (w/ Rich Bass) defeated Osirus (w/ Doc Ozone) and Christian Casanova to win the NCW New England Championship in the Triple Threat Showdown. In a huge shock Osirus eliminated the 2014 Rookie of the Year with his ‘Final Flash’ in the middle of the ring, taking the New England Champion out of the equation and leaving the heated rivals Levesque and Osirus one on one for the belt. Thanks to “High Class” Rich Bass nailing Doc Ozone with his clipboard, a distracted Osirus fell prey to Levesque who DDT’ed the former GA West on the apron and leaving him out cold to get pinned by “The Sensational One”. Following the match both Levesque and Bass took turns beating on Doc Ozone and Osirus as the two celebrated with their new Championship.

– “Ruthless” Ruy Batello d. “RIOT” Kellan Thomas with a ‘Portuguese Drop’ to win the NCW Heavyweight Championship after the mysterious Masked Man ran in to ringside while the referee’s back was turned, crotching Thomas and giving Batello the opportunity to win while the Lumberjake (at ringside to watch the match) chased the attacker out of the Elks. “RIOT” was in as much shock as the stunned Norwood crowd as Batello hightailed it out of the building as the four time NCW Heavyweight Champion.

NCW returns to the Norwood Elks Lodge October 16th for NO FEAR.

One Reply to “The Reign of Ruthlessness: NCW FALLOUT Results”