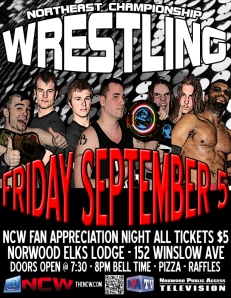 As a thank you to our amazing fans while celebrating our two year anniversary of hosting NCW events at the Norwood Lodge of Elks all tickets for FALLOUT will be $5 general admission for kids and adults. Tickets will be available at the door, as doors opening at 7:30 with an 8pm bell time.

September 5th will see the highly anticipated rematch between NCW New England Champion Rob “The Giant” Araujo and “Simply the Best” GA West, as both men wrestled to a thrilling time limit draw last time they competed against each other at NCW Red, White, & Bruised in July. This time around NCW Commissioner Dean “The Beast” Livsley has stipulated that this match will have no time limits, hopefully freeing both men to pull out all the stops at FALLOUT.

The new NCW Tag Team Champions will also be in Norwood at FALLOUT, as The Underground Anarchy (“Slamdance” Tim Lennox & “Bam” Brandon Behm) along with their manager “Black Magic” Sean Feeney defend their tag team gold against former NCW Tag Team Champions David & Eddie Loomis! Behm and Lennox are no strangers to the versatile brothers, but can the champs keep their hot streak alive against the high impact amateur standouts?

The Norwood Elks Lodge is located at 152 Winslow Avenue in Norwood, Massachusetts. For more information on Northeast Championship Wrestling and all our upcoming events please visit us at http://thencw.com and follow us on Twitter @theNCWtweets. NCW TV also airs weekly on Norwood Public Access, please visit http://www.npatv.org for your local listings.