Career Highlights: The official voice of Northeast Championship Wrestling and columnist for the Greene Screen and gerwerck.net

A hard hitting in ring competitor from the Granite State, “Mean” Atlee Greene first appeared in NCW working for JC Marxxx and then-NCW Heavyweight Champion David Loomis as an enforcer in their war against Richard Pacifico.

Greene returned in 2016 to join the NCW announce team quickly becoming the voice of NCW Television alongside his color commentating partner and friend Derek Simonetti.

In addition to his announce duties Atlee also writes for his own website The Greene Screen as well as http://gerweck.net. 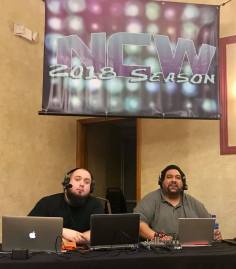